Five questions that will be answered by UFC on Fox 5 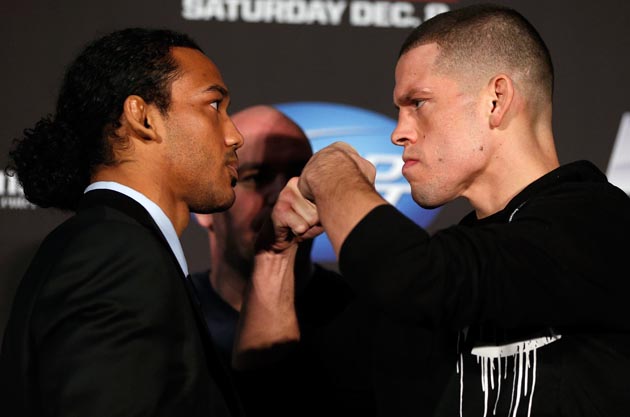 The UFC's fifth appearance on Fox goes down on Saturday night, with one of the more stacked cards to air on the network since. What will come from the card? Read on.

Who will walk away with the lightweight belt? The biggest question of the evening goes to the main event. Benson Henderson will have the chance to show off his skills against someone other than Frankie Edgar. Diaz thinks he can't win a judges' decision, so will he be able to stop Henderson, who hasn't loss by a stoppage since 2007? Or will Henderson hold onto the championship?

Is this B.J. Penn's last stand? Penn is a legend in the UFC. His first fight was was in 2001 at UFC 31. He even dabbled with retirement until young buck Rory MacDonald called him out. Will Penn be able to stop the 13-1 MacDonald, or will the young fighter's star continue to rise?

Who will fight for the UFC light heavyweight belt after Chael Sonnen? Jon Jones is scheduled to put his championship on the line against Sonnen in April, after their season of "The Ultimate Fighter" airs. The bout between Maurico "Shogun" Rua and Alexander Gustaffson will decide who fights for the belt after Sonnen.

Will the next bantamweight star stand up? Men's bantamweight champion Dominick Cruz will be on the shelf for a while because of a reinjury to his knee. Renan Barao will put his interim title up against Michael McDonald. The next challenger may show himself on Saturday during Mike Easton vs. Raphael Assuncao.

Will fans tune in extra early on a Saturday afternoon? The Facebook prelims for UFC on Fox start at 4:20 p.m. ET. Prelims on FX (a change from when Fuel aired Fox prelims) are at 5 p.m. ET. The early start time is due to the Fox broadcast, which is expected to end in time for the 11 p.m. local news. It's a Saturday during the Christmas shopping season. Will it affect how many fans tune in for the early fights?